1Password has always been a remote-first company. But how have other organizations adapted to remote and hybrid work, especially during the Covid-19 pandemic?

In the spring of 2020, we polled knowledge workers in the U.S. to find out how the opportunities and challenges of remote work were affecting companies and their employees.

The responses underlined the scale of the changes that had taken place, and the role IT played in enabling it. (That’s IT both in terms of the technology itself, and the professionals that make IT happen.) Here, we’ll share some of our findings and talk about the heroic efforts we saw in IT departments.

We only spoke with workers in the U.S, but have no reason to think these findings weren’t representative of other businesses around the world.

Before we go any further, here are a couple of the most important stats:

We surveyed 1,000 desk-based knowledge workers in the U.S., and the results showed just how colossal significant the shift to remote working had been.

“Revolution” may sound like hyperbole, but it felt appropriate when we looked at what was happening for millions of workers who use computers for their day-to-day job.

The results also highlighted the massive transition those companies had made. Only 27% of respondents thought their company was completely prepared for the move, leaving a large majority that still needed to do some figuring out. That said, only 13% of respondents thought their company wasn’t at all prepared, suggesting that the majority of companies were already working in remote-friendly ways to some extent.

Few could have predicted a COVID-19-like event. If some companies were more prepared than others, we suspect it’s down to the flexibility granted by forward-thinking IT planning and policy. More than ever, companies are reliant on cloud-hosted or -connected services more than standalone software. Clearly, though, some organizations had gone further on that journey than others when we conducted this survey.

It’s ironic that, of the companies with a historical objection to the idea of remote work, many were gradually preparing for it all the same, simply by keeping up with trends in technology. The more you use tools and processes that work anywhere, the easier remote working becomes if and when you do it. Much of the infrastructure for remote work was already in place – where people sit was merely the last piece of the puzzle.

In short, the survey showed that Covid-19 accelerated a shift that was already underway.

The IT challenge is huge – and complex

As we dug deeper into the results, it quickly became clear that IT was playing a large role in the shift to remote work. IT teams were enabling new ways of working, solving technical problems, and, frankly, saving the day. 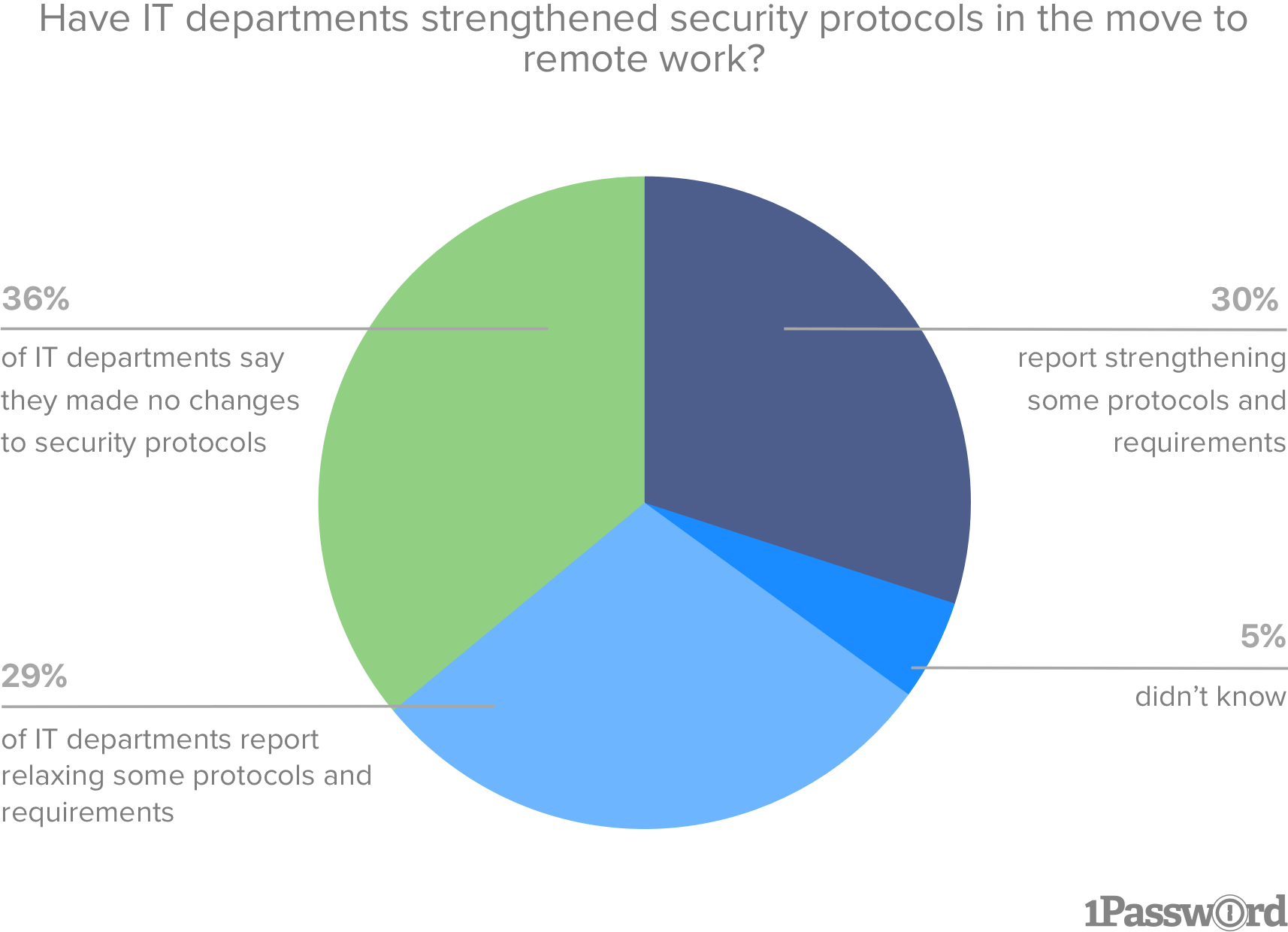 Unsurprisingly, security was a focal point for companies making the change – but it wasn’t a straightforward picture. Roughly a third of IT respondents said their companies had strengthened some security protocols, but a third said their organization had relaxed some. (And perhaps unsurprisingly, larger firms were more likely than small ones to have made no changes.)

In hindsight, our survey should have allowed that both strengthening and relaxing is simultaneously possible. On the one hand, companies might have been seeking tighter security around passwords, two-factor authentication, and access to data. On the other, they may have been trying to loosen policies that limit the selection of apps and services that remote workers could use to get things done. (In other words, bringing shadow IT into the light.)

Half the respondents who were breaking their company’s policy were doing so in an attempt to be more productive. 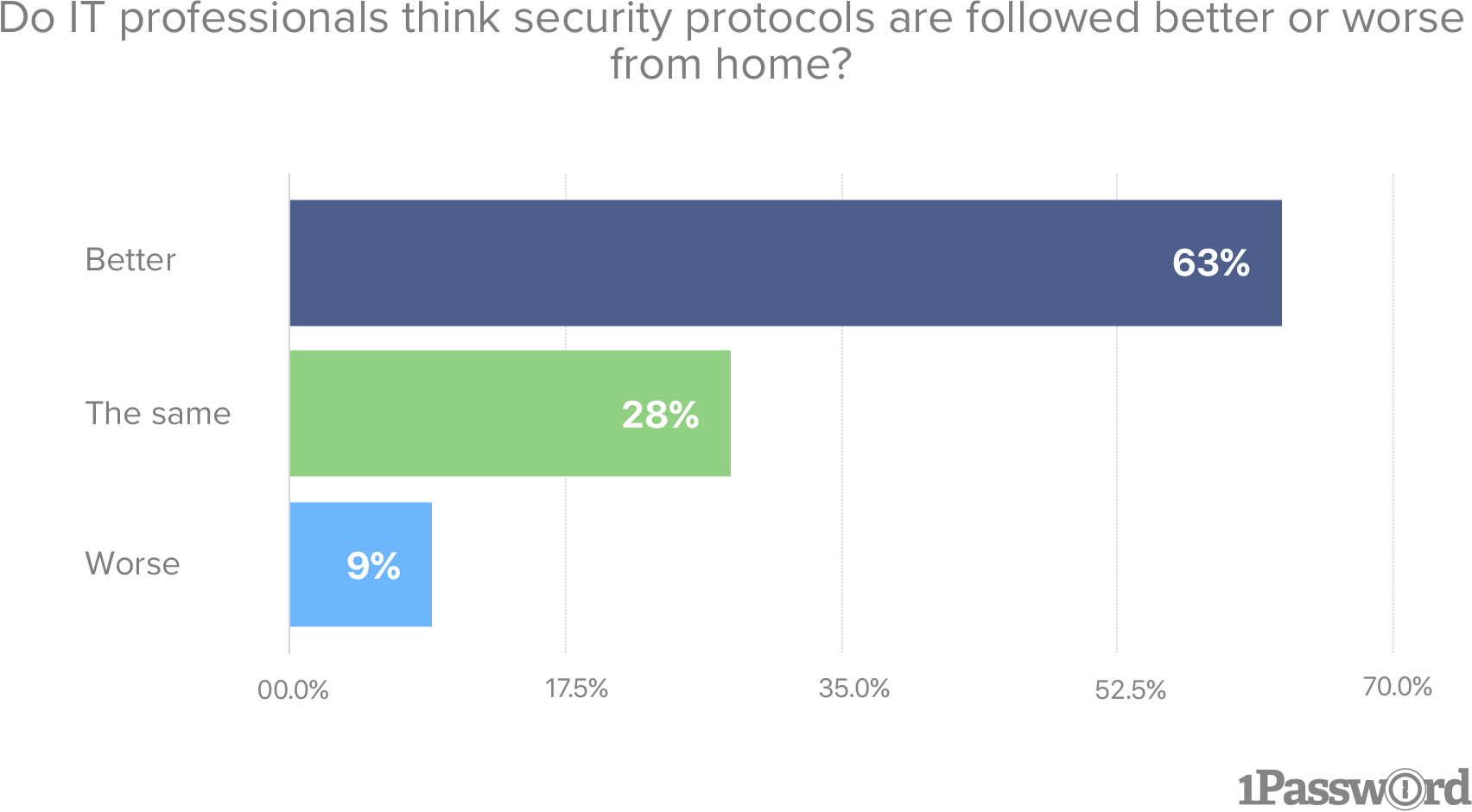 However, 63% of IT professionals told us that compliance with security measures had actually increased. This may have been down to a greater awareness of security issues (no doubt helped by company guidance) and an increased sense of responsibility while working from home.

Ultimately, we don’t know. Sitting in an office, complete with security guards, locked doors, and visibly-present IT and security teams, possibly lulled people into a sense of security. One that may have been false to some extent, given the nature of online threats. Companies still dubious of remote work should take note: This survey suggested that remote workers were taking security more seriously than ever. And their first priority was being productive.

Hero of the storm

Clearly, IT teams were performing administrative gymnastics to help companies and their staff get work done while simultaneously keeping everyone safe.

And that was on top of the increased workload of supporting remote workers with their day-to-day needs. Respondents told us that their top IT requests were helping to resolve connectivity issues, setting up devices, and handling software updates. 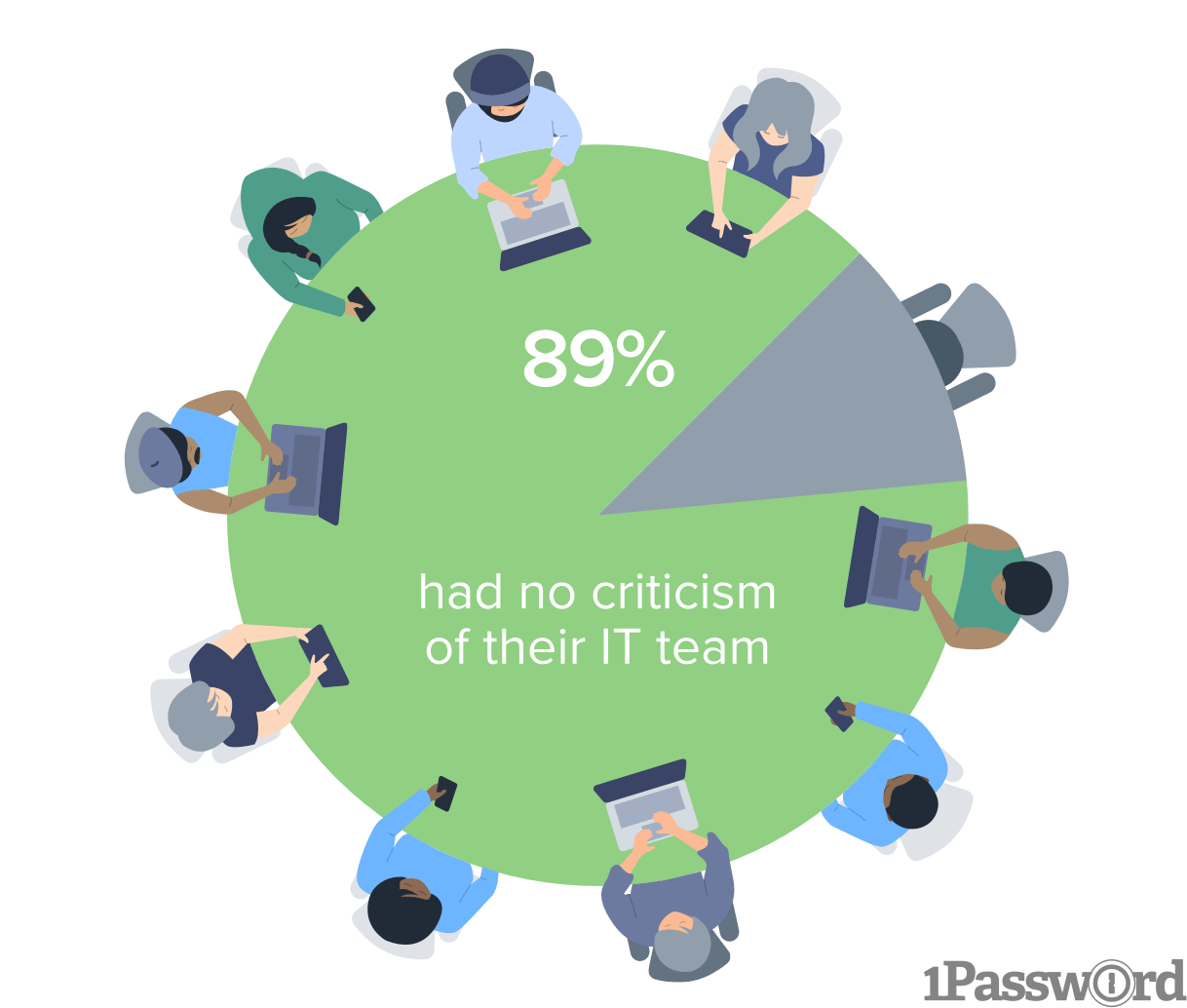 Remarkably, 89% of respondents said they had no criticism at all of their company’s IT teams. It was clear that the IT industry – and more-so the myriad IT teams out there in the corporate world – were doing excellent work to keep the companies they support in business during these difficult times. 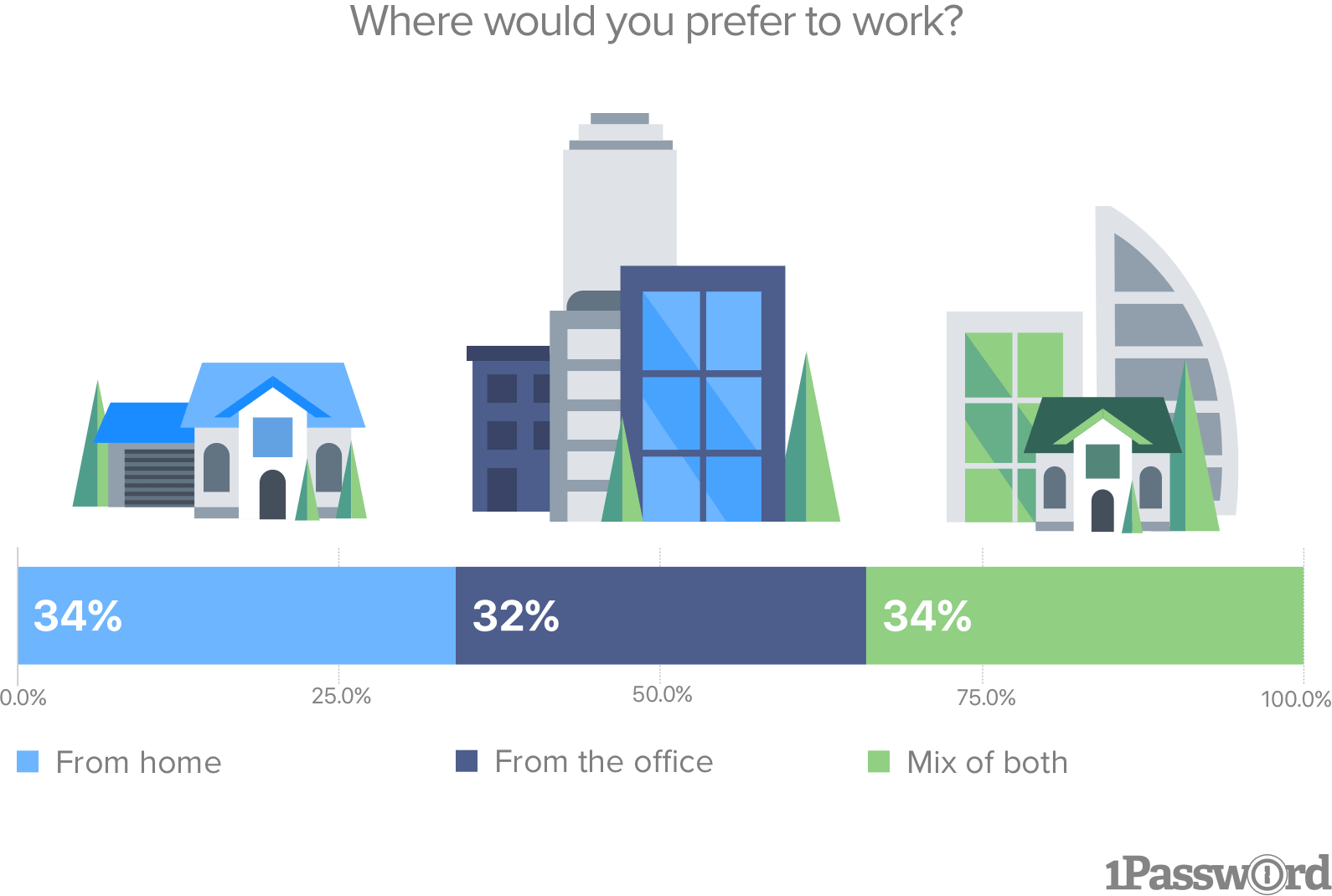 It was also clear that recent events were changing minds. 68% of respondents said they preferred working from home either some or all of the time, and 59% of respondents were more inclined to do so.

We’ve always been believers in remote work at 1Password. But this survey showed that more and more people are becoming believers too. The responses indicated that remote workers were happy, productive, and security-conscious thanks to the technology – and people – that support remote work.

We’re also long-time believers in IT teams and the important work they do. We’re proud to have built 1Password into an app loved by many IT professionals. We understand the challenges they face, and we’re doubling down on making 1Password as easy as possibly to deploy, support, and – above all – use.

A big thank you to everyone who took part in the survey.